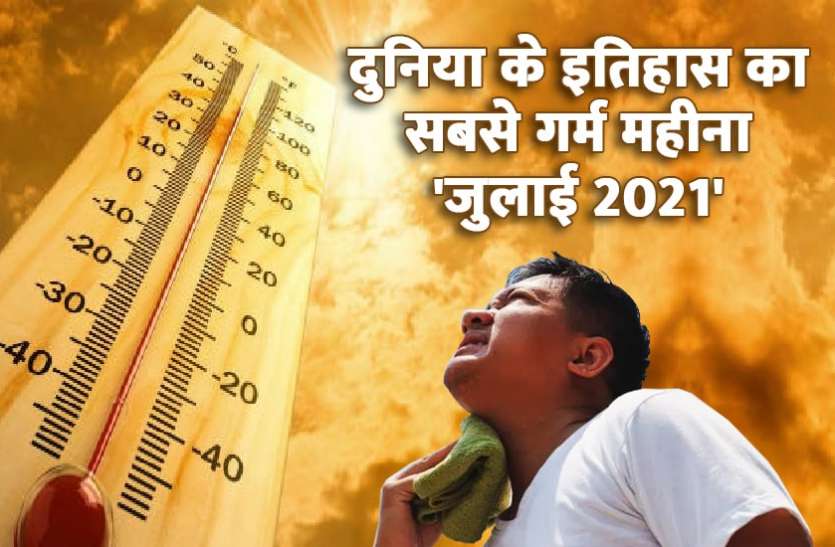 New Delhi. Usually July is the hottest month of the year, but this year the month of July has broken the record of many years of summer (July 2021 was the earth’s hottest month). New data showed that July 2021 has been marked as the hottest month ever in the history of the world. Whereas 2021 is one of the ten warmest years.

2021 one of the hottest 10 years
This has been mentioned in a report released according to new global data released by the US National Oceanic and Atmospheric Administration (NOAA). According to the NCEI, the year 2021 could be one of the 10 hottest years in history. Along with this, NOAA has cited rising heat as a major reason for increasing climate change. Also said that if it is not controlled then the situation can become more dire.

increasing temperature every year
According to the latest data, the total surface temperature of land and oceans in July was 0.93 °C above the 20th century average (15.8 °C). The record-keeping work started 142 years ago and since then this time this temperature has been the highest. At the same time, it was 0.02 degree Celsius more in the years 2016, 2019 and 2020.

Atmospheric concentration of greenhouse gases is also breaking records
Experts say that all the years since 2015 have been record heat. Every other year breaks the earlier record. 2020 was the second warmest year in history. Atmospheric concentrations of greenhouse gases such as carbon dioxide, methane and nitrous oxide also broke records in 2020 and it is likely that this record will also be broken in 2021. In April 2021, the concentration of carbon dioxide in the atmosphere reached an all-time high of 416 parts per million (ppm).

According to one report, ‘week-long extreme heat in high-emission conditions, which breaks records by going beyond three or more standard deviations. In 2021-2050, it will increase by two to seven times. The world saw a living example of this in July 2021. This month was proof of what our planet is going to endure as a New Normal. Its destructiveness and unpredictability terrified. It was as if the normal weather no longer existed and the geographical identity of the weather had become irrelevant.

According to Copernicus of the European Commission, July 2021 is the ‘third warmest July on record globally. It has been less than 0.1 degree Celsius colder than July 2019 and July 2016. It was reported that July is generally the hottest month of the year globally. However, August can also be hot at times. Apart from July 2019 and July 2016, July 2021 was globally warmer than any previous month on record.

Also read: The temperature in the area again crossed 40 degrees, the scorching heat

In a survey conducted in the past, July 2021 was said to be the sixth warmest month after the year 1901. According to the data, the average temperature in July was 28.52 degrees Celsius – 0.55 degrees above normal. These climate-related data has been released by the Meteorological Department, Pune (IMD).

This time, except for peninsular India, the nights in the month of July were also very hot. The peninsular region had recorded above normal rainfall in July. If you look at the data, 4 out of 5 warmest months of July have been in the last decade since 1901. This shows that the average temperature has increased significantly in recent times.