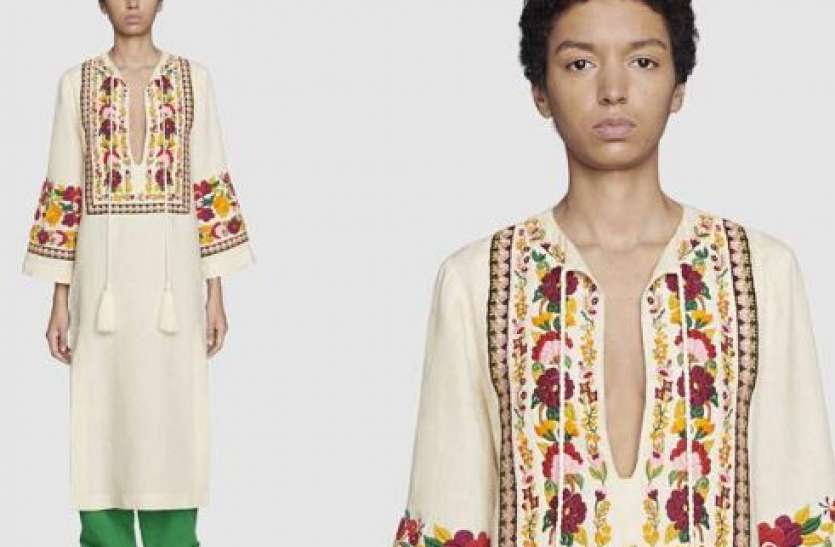 New Delhi. The world’s famous Italian fashion house ‘Gucci’ is once again in the headlines. The reason for her coming into the limelight this time is Indian apparel. Gucci has been the center of discussion among social media users these days.

In fact, Gucci is selling a linen kaftan that looks like an Indian traditional kurti. The special thing is that the price of these kaftans, which look like Indian kurtis, is also shocking. Gucci is selling these kaftans for Rs 1.5 to 2.5 lakhs. This is the reason why it has become a topic of discussion on social media. Users say that when this dress is so cheap, why is it being sold at an expensive price.

Also read: Google called this language of the country ‘worst’, apologized after people’s displeasure and uproar, now the government is going to take these steps

about 250 times more price
Gucci is a fashion brand from Italy. It manufactures a variety of luxury products including handbags, footwear. This dress (kaftan) is usually worn in Asian countries. In India, kurta of branded companies is available in 500 to 1500 rupees. This is how Gucci is charging 250 times the price for its kurta.

Gucci be selling this kurta for C$ 4,550 and I am like …. Who is shelling out that kind of $$$ for a kurta that ammi bought me from Murree’s Mall Road for 300 rupees. pic.twitter.com/gxlBHxwpxC

Social media users are shocked to know the price of the linen kaftans being sold by Gucci. At the same time, people are seen arguing fiercely on this issue.

Gucci kurta for $3500?! I can have Ashokbhai make this back home for 500 rupees pic.twitter.com/eq3fHIZMjn

At the same time, a user raised the question and said, on what basis has the price of this dress been kept at Rs 2.5 lakh?

Such is the Gucci kurta
According to the website, the specialty of this kurta, sold as Floral Embroidery Organic Linen Kaftan, is that it has flower embroidery, self-tie tassel with neck opening facility.

Also read: Four youths, who came out to take cake for father, killed son with knives, will be stunned to know the reason

EMI facility
Gucci has also given the facility of EMI to the customers to buy this kurta. That is, expensive kurtas can also be bought on easy monthly installments.

Controversy over Gucci in the past
This is not the first time that the world’s famous fashion brand Gucci is getting a bad name, even before this Gucci has become infamous for Indian apparel. In the year 2018, due to a change in a cultural dress of India, it had to be trolled a lot.